Episode # 120   The Power of Masterminds

Today on the show, Natalie Ledwell interviews Richard Barrier, the creator of TXT ME L8R, an android application that disables the use of cell phones while driving. Barrier's main goal is to keep teenagers safe while driving, the application sends incoming calls straight to voicemail, does not receieve text messages, and only allows certain outgoing calls in case of an emergency. Barrier strives to give every parent peace of mind while their teenager is on the road.

Episode # 120 The Power of Masterminds

Natalie: Today on the show I'm speaking with Richard Barrier has created an amazing app on saving lives, now he talk about the power of the mastermind how law of attraction played a part in his success. Enjoy. Hi I'm Natalie Ledwell and this is the inspiration show. Now, today my special guest is Mr. Richard Barrier, hi Richard?

Natalie: the reason I have Richard here, his part of the mastermind booklet that I'm involved with. We'll talk a little bit about the power of the mastermind. How laws of attraction place into one of the big projects that you are working at the moment, which is this amazing app that which disables the ability to send SMS while you're driving we'll gonna talk more about that in a minute. So, let us start about you you're your story, what's your background?

Richard: my background, I've been working with large computer systems since late 70's and on two thousand and nine I got laid off.

Richard: yeah, like a lot of people did and I work for the school I went for Samantha College and when I got my lot I say okay this is my opportunity to go to school build my degree because I felt I've got to rebuilt myself to make myself comfortable and I got my degree in entrepreneurship and motivation and decided I don't wanna work for anybody else. So, I started my own company.

Natalie: That's fantastic. Now, that's the thing like you know there's so many people got laid off like you on 2009 and it's really interesting. I don't like what specific your age is but what's the age bracket that you're fall in to?

Natalie: Okay, so we didn't do the math okay. So, the thing is even at this you're your like, you're not lying down.

Natalie: and you're just starting to get charged.

Richard: Exactly. I felt there is a saying that I caught, if it's to be it's up me that's why I hired myself.

Natalie: Excellent. Now, you come up for the idea of this app now, I know you've been talking about this mastermind movies now tell us how does old transcribe?

Richard: Well, I've got great council of course for the mastermind group, because I'm trying to program for myself because of my back but it was a much bigger project that I've been handled. So, with the mastermind's council which has to go higher people to do it for me than to spend my time, I do it myself. So, I took that advice, I approach one of my friend and one of my business teachers coz' here in programming group as well they help him on his portal that he was working for restaurants that's why I told him to get the name of the people with contacts. Well, I see you on a disclosure form and he was sort of weird, something would say that and when he facts it to me or actually emailed it to me he turns out that he was this development manager of the United states of this group or programmers in India, it's so just lying up and it's okay.

Natalie: Excellent. So, how did you get the idea to create the app?

Richard: I walk a lot and so I see certain people coz I watch them and they are watching me as I'm walking around especially on corners and I see a lot of people there looking down and looking up, looking down and looking up and they're usually texting or using their phone when you're driving which is courageously dangerous and basically I need and my background in programming I can fix this problem I can make people curable by their actions and make a profit at the same time.

Natalie: so the thing is all you need you finish doing your entrepreneurship degree and so now it's like you've started to take action. We talked a little bit before about how to take action in the mastermind group you've mentioned it now that we do after them and we don't where we find the money but it's like you know, what was that process that you went through?

Richard: my whole life is been a whole, it's almost like I look at myself as three years quality management and so I knew that I have joining this group because I have be a different person by joining the group like yourself and the anybody else and I basically invested myself. I was coming in the decision of lack coz' I have the money I just don't want to spend it but what I thought about and what I felt about I said I have to do this.

Natalie: I know it's a, you've a great addition in the mastermind and now any decision and you've got any advice. How did a law of attraction come into play, what kind of things are falling into you on this journey?

Richard: it's just everything come into place and the people were there and my ideas were there a good friend of them was Terry Simpson ask to my group and came on want to help me and she's one of my business partner and my background is I have a degree in business and I have a high-tech background and she has the brand new marketing and experience, I don't have it's not what I say not my talent so hire your talent and suppose your rates and I brought her on board and actually she came on board and everything is just going maybe in business with corporate sponsorships that's the poor piece of what she's doing and then and I have to do the social media and people to know about the app I just do a little piece of my mic.

Richard: it's not just, it's not serious coincidence. Too many coincidences happen all by by by by myself and okay accept it, embrace it.

Natalie: okay law of attraction does exist. Alright I get it.

Richard: and that needs you, okay fine.

Richard: thank you, thank you. It's called txt me l8r well it does a lot of things, the biggest thing it does is save people's lives because I was this technologies, when I was 16 or even 18 or even 20 I come while I'm sitting here and I've made a lot of dumb mistakes when I was young but what it does is the parent will load it on this phone and it stops the phone in receiving and sending text messages, just on the app on the phone and all the incoming calls goes straight the voice mail and if the parent has a choice to even lock or block outgoing calls block it on 911 and the parents block will work but if they choose not to block it, mom and dad will get an email and a phone call of the time and the speed of where the phone was when they made a phone call.

Natalie: wow, so the first of this really kids and they can keep it track of them. So, what about the kids can't they store a different.

Richard: they can install it it's also, because it's base on GPS and on the GPS but if they do that they're mom again will get an email so we gave either disable the app believe on the appreciator or disable the GPS.

Natalie: so, it's really a good way to keep our kids what's the other thing what's an adult do the same thing because you know the freeways here we all you know that the speed limits is 55 but no one drives at 55 how many times I'm across because I'm only a passenger and I saw someone driving at 80 and doing text message.

Richard: yeah. It's extremely dangerous that's the number one cause of teenage death in United States.

Natalie: So, txt me l8r how can people get whole of this app. It's an android app you go to Google play and download it, it's only $4.99 premier it's like a cost of star bucks cup of coffee so to protect your child but give you a peace of mind.

Natalie: yeah. Absolutely and so when you say text me later is it it's txt of what happens to it?

Richard: actually what happens is if my app is in your phone Natalie and I text you or call you, you will never know that I have contact you the app will text back to me text me later I'm driving it's txt me l8r.

Natalie: it's a txt.

Richard: like when you do when you text it.

Natalie: Richard thank you for coming.

Richard: you're welcome. Thanks for having me here. I really appreciate it.

Natalie: and this is one of my first interviews when I'm doing the news studio. It's completely a different set up we got the fancy pants studio now. I've been really creating a lot more on this studio. So guys I encourage you to share this video and all the information in it by clicking the Facebook and twitter buttons above and if you haven't done so already make sure to put your email on the box above there, I would love to send you the manifesting with the masters video equals it include masters like Bob Proctor, John Assaraf, Joe Vitale and I would like, it's validate 87$ and I like to send it to you for free. So make sure you put your email on the box above there. So until next time remember to live large, choose courageously and love without limits. We'll see you soon. 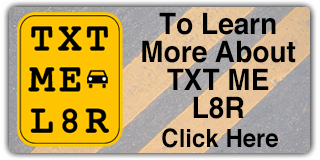