Natalie Ledwell interviews Sharon Babineau about the amazing story of Maddie, who was diagnosed with cancer at the age of 12. Maddie underwent many surgeries and procedures, yet was inspired to help other children around the world, who she felt were even worse off than she was. She was given a wish to do anything by the Make a Wish Foundation, and used it to start a school in Africa, and that was just the beginning...

Natalie : Today on the show, I'm talking with Sharon Babineau who shares the inspirational story of her daughter Maddie whose selfless wish changed to cannon community forever. Please enjoy.

Hi I am Natalie Ledwell and this is the Inspiration Show. And today my special guest is the lovely Sharon Babineau. Hi Sharon, how are you?

Natalie : Sharon, we were talking yesterday, I was talking about how the videos of the inspiration show is categorized. And we didn't know whether to make the passion peeps video, or an inspirational kids video, or an inspirational stories video, or contribution video, coz it's relevant to all of those categories. And I can see that you have a fantastic photo of you daughter Maddie behind you. Can you maybe just start to Maddie's story and what you would ever to accomplish?

Sharon : Yes. I'd love to. So my daughter Maddie was diagnosed with cancer at the tender age of 12 and during that time, she had to undergo 1 year of chemotherapy, radiation, and multiple surgeries. So her and I ended up living pretty much in the hospital, during that time. And the chemo was 2 weeks on, 1 week off. And then during that time, while she was bedridden, the only thing that she could really do is watch TV. And she watched this one show, I think it was World Vision or something like that, and it was just young orphan boy watching down the street road in Africa. And it just touched her heart, and she just cried watching it, she really hadn't realized that there were children halfway around the world went no parents, no food, and it just absolutely devastated her. And she just wanted to do something but at that time, she was actually fighting for her own life. So she always had their thought at the back of her mind that one day she would help these forgotten children in Africa. And it was just a couple of months after that, she was approached by the Children Wish Foundation and offered her a wish, anything, anything they said; shopping spree, anything. Of course I was packing my bags getting on ready to go on some nice cruise, but she decided that those wish was bigger than her and it needed to be lasting. And instead of taking something for herself, she gave it away. She used it to go to school in Africa, she felt that the children there needed it than of her.

Natalie : Right, well. And this is from the Wish Foundation, Isn't that right?

Sharon : So what she decided to do is she partnered with Free The Children which is an organization that started by Craig Kielburger. And he started it at 12 connected with him said if I'd use my wish and wanted to go to school, can you do that? And they were like yes, perfect, you know we can be involved in that. So she connected with Craig, had a school built and my daughter was a very very shy child, so she did this privately. I've got now for anyone to know about it, she just wanted to do something nice and try to get on with her life and unfortunately that the cancer came back for the second time, and our lives again turned upside down back at the hospital. Now, when you're diagnosed with bone cancer, and that it comes for the second time, it's very difficult to get it under control. But we tried some such transplant and she spent 90 days without eating or drinking, very very sick. And during that time, Craig stays involve with her and encouraging her to get better, then she wanted to join the organization for the children and that was her dream. And she send her stuffs to all over the world and she get some letters from some of the kids there she thought that it was pretty wonderful. But then she found out that the younger girls had couldn't go to school because they had all these chores to do, they had to haul water. So she started selling jewelry out of her hospital bed turned his money to go buy material to go to school. And that was pretty told and on the community she finally allowed her story to be told. Of course the community brawled behind her and she just exceeded beyond her dreams how much money she thought that she could raise because that was absolutely very wonderful.

Natalie : So while she was still with us, what was she able to accomplish? You know in any in Africa.

Sharon : The school, and from the wish, the well is now standing there. And then before she passed away, she's an extra-ordinary child. She sat me down, she know she was gonna die, and at that time she was 15 years old, wise beyond juniors, and she made me promise her I'd be happy, and I was like, ah! How can I even imagine that? You know, I wish I moved her of a young child was just incredible and I am struggled with that, so much. But I knew that her dream was this village, so I committed to keep that dream alive, and really it just touched so many people. This dream was never going to die so we know call it the everlasting wish which is the name of her foundation, and we now built a medical center our wave been responsible for hundred thousand dollars towards a wonderful medical center intern community in Africa and this summer is going to be our 5th Anniversary which I can't believe as a mom that's been a long and I missed her terribly like it was yesterday. But we get to celebrate her. So we've decided to build a maternity ward because it was always my daughter's dream, to be a mom. So now she could save lives, just this maternity work is. It's gonna be really special, we're pretty excited about that.

Natalie : It's so amazing. So doing a lot of this work yourself, you stood fun racing at the moment?

Sharon : We do a run here in Canada in Hamilton called Mad for Maddie, making a difference for Maddie. We do the run last May, last Saturday in May and it actually took off in Victoria D.C. and on the East Coast and mostly run by teens, you know, we really tried to empower them. So it's about 4 hours, they can walk or run, we bring a motivational speaker, we bands from other schools, singers, dancers, absolutely extra-ordinary. It's really a celebration. It's really empowering to everyone.

Natalie : Awesome. And I get that you're actually heading back to Africa soon.

Sharon : I am very excited.

Natalie : Is that to work and the Maternity Ward?

Sharon : Yes, I believe they're starting the work so I go over. We wanted take pictures, we wanna help, my son and I are going. Yeah when we heard that women are being questioned wheel bearers for you know 10 to 30 kilometers, because there's no place for them to give birth safely, and we knew that this is what we really wanted, so we're pretty excited that this part can be done.

Natalie : Right. And where in Africa are we talking?

Sharon : So it's in Kenya, it's in Maasai Mara. So the school's in Matoili. And I believe the medical center's a little further out but its services are quite in a large area. And I was there about 4 months after she passed away, I was actually hijacked technically by Phil Keoghan from the Amazing Race. So she had a TV special called No Opportunity Wasted and when we heard about the story, this has to be our statement, into our hearts. And so a camera corrupt showed out our front door, unexpectedly. My family know about it and I didn't and then we had a plane with if we were to find you in Africa, so I got you go over. And what they did is they popped me through the, through like the Davela, life of Maasai mother and so I cooked the way they cook and cut the brush and a lot of humility in seeing what they do and how hard they work, so it's really inspiring for me and I also realized that not only with the well from my daughter's school only when we're saving from that long distant everyday from the children that clean water is that we're saving lives too.

Natalie : Yeah big time. Now I know that Maddie's action is spawned the whole series of a been saver at Kenya and I know that her actions are also made a difference here in the US as well. And I think I read somewhere that the school that Maddie went to actually had an on-going, some kind of an on-going project, do you know much about what's happening there?

Sharon : Well, what we did of Maddie where she graduated 2 years ago, so I've approached her school and I asked them just for one day take the focus off the limos, fancy dresses, just before grad and do something in your community for somebody else. And I called it Mad before Grad. So make a difference before graduating. And we thought 800 mega mads are kind of and it was actually amazing. So we're hoping to continue that because that is really empowering for them also.

Natalie : Fantastic. Well, thank you so much for sharing this story today in our show and you're doing amazing job keeping Maddie's legacy alive. Are you keeping your promise? Are you being happy?

Sharon : I am happy.

Natalie : Excellent. That?s great. I people wanna find out more about Maddie and her story and yourself, and make a donation, where can we send them?

Sharon : So if they go to Maddie's website so that's http://www.maddieswishproject.com.

Natalie : Ok, http://www.maddieswishproject.com. Excellent. Well thank you so much for joining me today Sharon. I wish you all the best and hopefully we can create some more awareness from Maddie's passion here and I hope you even further the medical center and everything in Kenya. So thanks again for joining me Sharon.

Natalie : So guys please, please share this video and the information in it and I encourage you to do so and you can do that by clicking the facebook and twitter share buttons above. And if you hadn't done already, make sure that you leave your email on the box above there because we?ll send you the six pre-made mind movies and we'll keep you up to date in all of the upcoming shows. So until next time. Remember to live large, choose courageously, and love without limits. See you soon! 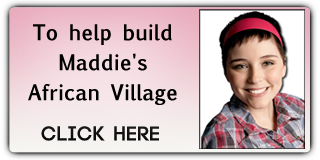