Can you imagine having the power to heal yourself and others? Well, actually you do! You just need to learn how to harness it. On this fascinating episode of The Inspiration Show, my special guest and author of “The Secret Nature of Matter,” Richard Gordon, explores the powerful connection between our thoughts and reality. He explains how, by applying his breathing techniques to raise one’s energy levels, you can heal posture, reduce pain, balance emotional distress and even pets. If you or a loved one is suffering from any of these ailments and are open to a different modality of healing, then this episode was made for you.

NL: Hi everyone! My name is Natalie Ledwell and this is The Inspiration Show. Today on the show I have a very special guest who has a new book out called “The Secret Nature of Matter.” This is a completely fascinating subject that we’re going to get into today and I can’t wait to share this with you. But before we do that I just want to remind you that if you are watching this show live on Facebook or if you’re watching it afterwards on our YouTube channel, don’t forget that after the show is over if you click the link below this video you can take my 30-second quiz to figure out what is holding you back from success. So let me introduce my special guest today, Richard Gordon. Hi Richard. How are you?

RG: Good to be here. Thanks for having me.

NL: It’s such a pleasure to have you here. “The Secret Nature of Matter,” this is such, like I said, an incredible subject that we’re going to get into today. But before we’re getting to the crux of that, can we just get a little bit about your story or your background and how you got, or you know, how you arrived at writing this book.

NL: So what do you think is your explanation as to why you can charge or put intention into an object and how does that then create this change in our physiology?

RG: Yeah. It turns out that we assume that the mind is confined to the brain and that the brain is an epiphenomenon of electrochemical reactions and neurons. But I believe that our consciousness, our spirit, our soul, our being is much more than our physiology and the mind is not confined to the brain. That’s why I learned that I could send heart chakra energy to somebody and untwist their posture. Once you realize the mind is not confined to the brain and our love actually is a real energy force that has a physiological impact on other people, then it’s not that far stretch to go oh you mean this penny is holding whatever energy intention you put into it because if it’s all made of subatomic God stuff, it’s all made of god stuff then all matter is really consciousness in physical form. Consciousness is like the cause energetic but we can implant anything with that consciousness and how do we know it? Because it can have a physiological impact. And like I say, people don’t care about untwisting posture, that’s just my thing. Nobody cared about the phases of Venus but it’s how Galileo knew the earth went around the sun. No one cares about the position of stars during the eclipse but it validated Einstein. We are using this one simple little technique as a way of knowing that our love actually has a physiological impact on people we're caring about. So anytime you're bringing your awareness or your consciousness, your intent, your desire towards something or someone you love, you're actually having some physiological impact. Maybe small, maybe large. You know when somebody stops loving you, sometimes you feel this tremendous void like they’re not holding that energy anymore for you. And you feel that lack, that emptiness. But when you can learn how to focus and amplify the energy in your body, this is what Quantum Touch teaches. We teach people how to use breathing and body awareness exercises. No attunements, there’s no magic symbols. It’s just how do you move awareness through your body so you can actually feel parts of your body as you’re breathing. And you move it in waves and spirals and different techniques. Then we raise our vibration through breathing body awareness connecting to love, joy, compassion, gratitude - these kinds of energies. And we use a very complicated method called the Where Does it Hurt technique, where you sandwich the part that’s in pain with your hands while you’re doing the breathing and body awareness. Their energy comes up to match you, you never come down to match them that would cause you to feel drained and tired. You lift your vibration higher and higher, their body matches it. All healing is a function of self-healing. The body heals itself. It looks like you are the healer but actually, you're just facilitating their body doing what it wants to do in the first place. The definition of a great healer “someone sick who got well quickly” because we don't actually heal people. We've raised our vibration to let their body heal itself and we get high in the process. A physician Jerry Pittman wrote in its elegance Quantum Touch first helps the practitioner and then the other person comes up to magic and their body and spiritual intelligence are doing the healing. I've never healed anybody. I don't know how to heal a cut on my finger. I just hold the energy in the space to let their body do its own self-healing.

NL: Right. And so with this book, are you, like, can anyone do this? Like can anyone learn how to do this for the purpose of the book?

RG: Yeah. I ran 56 experiments in the book and I’ve had lots of people tell me, yeah I tried the experiments and they’re working. I can do it. And so this is such a monumental shift of awareness that really shows us that your love is valuable. It’s your most valuable part of you is the love, the compassion, the desire to help yourself and others.  Your inspiration is meaningful and the stuff that we intrinsically know, we can validate it in an empirical setting. So I've stated my long-term goal recently. I just kind of formulated it. By the year 2040, I want to see this taught in every school, every child learns how to do energy healing work because it's the most valuable skill you can have six or eight days a year. You don't have to use it every day but when it's needed it's really valuable. I want to see this practiced in every hospital. We had one nurse, the doctor told her you have to stop doing this on our post-surgical care patients and she said why? He said we can no longer predict how much pain medication to give them.

NL: Such a trouble, but what a problem to have.

RG: Exactly. And I want to see this studied at every University in the world because it redefines what it means to be a human being. That we are so much more than these meat machines words, these spiritual entities and I came up with about 25 implications in my book of what this means. You can’t prove it but everything points that we are actually spiritual beings and not just meat machines and that our love is valuable and has impact.

NL: Right. So who are the people who you think will benefit the most from reading your book?

RG:  Anyone who wants to grow, discover the mysteries of the universe. Anybody curious about the nature of reality. Anyone who wants to learn new human abilities that we didn’t know we had and stretched their blow their own mind about what’s possible. Anyone who wants to grow and see what is next. You know when, you know Benjamin Franklin was flying his kite and realizing electricity and grounding, you know, lightning rods and stuff, that was a major breakthrough. This is another kind of breakthrough that redefines all the sciences, redefines our identity as humans and just think. I mean, I love what Elon Musk said, I want to live in a future that I find inspiring. I don’t want to live in a future that depresses me. I want to live in a future where people value their compassion, they value people’s love more than they just value the acquisition of more stuff. Because if we value compassion there could never be a hungry child in the world and when people realize that their love actually has impact, we could hire people who are not good at making a lot of money. They’re not really technological or hard workers but they’re wonderful listeners and they care about people. We can hire them to be in hospitals and just run energy and sit with people and love them. We’d probably reduce hospital cost by 30-40 percent, just that alone. But we need to shift our priorities because our beliefs shape our attitudes, attitudes determine all the thoughts and feelings and thoughts and feelings determine all the decisions and choices we make. So if we can shift a core belief about the nature of reality, then all the other thoughts, feelings, choices, decisions, emotions get shifted in the process and we are now on the verge of having a whole new way of being that can shift our core beliefs and priorities about reality.

NL: Yeah. Absolutely. Well, I'm excited. I'm excited about the book and I'm so glad that we got the opportunity to talk today. Because I believe that this is a powerful message and it's a way that people can take responsibility or take charge and control again of their life and their outcomes and you know their happiness and joy levels. So where can we send people Richard to get their hands on the book?

RG:   You can go to Amazon to see the “Secret Nature of Matter” or to look up Quantum Touch, The Power to Heal to learn the basic techniques or you can just go to quantumtouch.com and learn about. We’ve got practitioners in over 50 countries, my books are in 17 languages. We’ve got a big foot wide footprint around the world, even the websites, and I think seven or eight languages now. So we’re just getting started. It’s just beginning to penetrate the world awareness.

NL: Yeah, you are. All right, darling, thanks again for joining me today. It’s been a pleasure talking to you and guys I encourage you to share this video. Please get the word out. You can do that by clicking the Facebook and the Twitter share buttons on this page. And if you click either the link below or the banner to the side you'll go straight to Richard's website from there. And don’t forget that once the show is over you can do my 30-second quiz so we can figure out what’s holding you back from success. So guys until next time. Remember to live large, choose courageously and love without limits. We’ll see you soon. 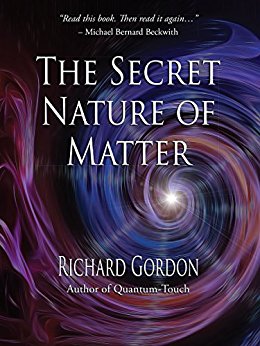