Natalie Ledwell speaks with author, motivational speaker, and expert teacher in the film The Secret, Mike Dooley. Dooley worked as an entrepreneur and accountant for years but left the corporate world to follow his passion. Today, Mike travels the world as a life mentor. Dooley originated Notes from the Universe, an inspiring online community with thousands of subscribers. Dooley continues to motivate and empower thousands of individuals around the world through his written work, online seminars, and global coaching conferences.

Natalie: Today on the show I'm speaking with the superstar from the movie The Secret, Mr. Mike Dooley and he explains how important it is for us not to mess with the Cursed Hows. So stay tuned.

Hi I'm Natalie Ledwell and this is The Inspiration Show. And today my special guest is Mr. Mike Dooley, hi Mike how are you?

Natalie: Now you have might have recognized Mike as one of the superstars from the movie The Secret, and he have been teaching the principles of Law of Attraction for, how many years now Mike?

Mike: Well, specifically, directly, 12 years. But for 10 years before that I was putting little homes on t-shirts about life dreams and happiness that we sold, my brother, mother and I all over the world. and that was kind of my accidental step into the direction that I am right now, living as a full-time teacher, speaker, author.

Natalie: Yep, now you've got an actually really interesting story, can you share that with this, a little bit about you background, because we did know that you start out at being like a teacher of these principles.

Natalie: And so, you are actually describing a situation that a lot of people, I think by choice you would say, but a lot of people are put into this situation where they've been made redundant, they've lost their jobs, they've ceased, maybe they've to close one of their businesses down and they are looking at what to do next, and what I'm finding is that a lot of people that we're coming across are kind of; "We're going to do this again, I'm going to do something that I enjoy, something that I feel passionate about, something that I'm good about." So, what I hear you saying is that, if they were to write affirmations, and create vision boards this rather than focus on specific vehicles, specific type of business, they should be creating affirmations to describe the life? That life that whatever business that is, it's going to create for them?

Mike: Yes, exactly right and I come across so many of the same people and how search remedy cause I was there, I mean at first and he wonder, am I going to be forever telling stories, of my price-lower days, and manifesting Hong Kong harbor and the thing is where my story is back then, you know, this is the way life goes, you know, it's the best behind me, it is in my now-pain-to-dos, for having such a great start so I know-know where many of your folks are coming from, and yes! You know I love my life, is a great affirmation, I'm surrounded by wealth and abundance, everything I touch turns to gold, I have turned clarity, especially when you don't have clarity, I said the right thing to the right person. These affirmations are super powerful and cause my approach does on the surface seems so in-alien, have general end-results. Let me rephrase it little bit again, the details rock! The details are awesome, the details are going to get you salivating over where the future is taking you and the details will throw you out of the bed in the morning with a smile on your face and a roar, just don't attach to the details. So, use your affirmations and use your vision boards and use all of these things you've always used, but basically by insisting on the generalities and being flexible with the details, you're doing what many others have said; "You're living room, for even better." It's like saying you know I'm giving thanks in advance for my XYZ for better and I give thanks for so and so for better, if you always add FOR BETTER, then you are not attaching, same thing I mentioned, as achieved, you're living room, attitude, freedom, the divine intelligence to blow your mind in ways that you cannot now comprehend at being bold, but it doesn't mean it can't be bold and it's the same with the miracles that we don't see happening just cause you don't see them happening, because today just looks like yesterday doesn't mean you are caste in miracles and then for the end-results that you've frozen in, the excitement you've generated thru Mind Movies, or vision boards or whatever, you are summoning from the wood-work, partners, players, accomplices, soul mates, who are now negotiating their way to you unannounced to you but you're divine intelligence, the next thing you know, you're going to be walking to the mall and their chocolates are going to fall in your peanut butter and you're going to be like; "Oh my God!" and because of the work that you are doing now and the miracles that are happening now behind the currents of time and space, very invisible, but they are still happening.

Natalie: Exactly, and that's the thing. What we are talking about here is... in my experience, you would never achieve the way you think that would go to get you to the end-result is never the way it happens. Very rarely does it happen that way. Okay, before Ryan, our partner purchased the audio from Mind Movies, when he and I involved in a network marketing business, the affirmations we ran for this business about, being able to travel the world, that was something we feel passionate about, be able to help people, help people make money, you know, work on the base of the laptop if we wanted to, and we were convinced that this network marketing business would be that vehicle, but we were open and we were flexible, and we look at Mind Movies, this is the vehicle that got us there.

Mike: That so illustrates what I'm saying, because if you had attached and said my God the universe loves me, it's conspiring around my behalf, my thoughts become things, there's the Law of Attraction, I'm going to make it happen! You would have slam shut the door of all other possibilities and for whatever other reasons; your priorities, your beliefs, you couldn't be where you now are, neither could I, which is which is why, you know, use this excitement, I'm going to have this lifestyle, that lifestyle, these bells and whistles and even details but then release, so the universe can do what is done for you, and it certainly most did for me, I write notes from the universe for a living, for free and I'm surrounded in abundance I traveled all over the world, I'm living the life of my dream, I could never have, never have thought of that but because I didn't attach, I mean I was looking at an oration repair, one of my secret passions my whole life, I was looking at you know, all kinds of weird things, but because I did so without attachment and because even though I went to the trade fairs and the expos and the... this is without attachment it left room, for even better than I could then have described.

Natalie: Yep, that's perfect. I am, what we're talking about here is things that you could never have planned for in a million years, best-life plan; you could never plan for this. And that's why it is very important to remain open and flexible. So Mike, you know we've been talking about the Notes in the Universe and a couple of New York Time's bestsellers, if people want to find out more about you and maybe get their hands on the notes, and some books and the things that you have, where can we send them?

Mike: Ah, to tut.com tut! Like the Egyptian king dot com, very easy and stems from the old t-shirt days, totally unique t-shirts, before there wasn't internet and so we got tut.com as the domain name, now since we're totally unique thoughts, and there I've got 8 books, 5-6 audio programs, DVDs and I'm constantly touring all over the world, next week Sta. Barbara, the week after Massachusetts, January, Seattle, March it will be Berlin, Cologne, Manchester England so I'll be coming to a town near you. I'd love to see you, check it out at tut.com.

Natalie: Make sure you go there and you know I've mentioned this to you before Mike, I unsubscribed for all the list cause I got so many emails into my inbox as it is but the one subscription that I do keep is the Notes from the Universe, so if you guys are not subscribed to that...

Natalie: Yeah, make sure that you do that every day and you know what, it takes a couple of seconds to read about it just absolutely brightens your day so I really appreciate all the work that you put into there. 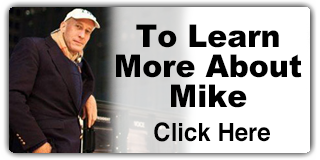