Natalie Ledwell travels to Los Angeles to talk to Pat Soloman, the creator behind Finding Joe the movie. The main theme of the movie reflects on the lives of people around the world, and demonstrates how everyone's life is a Hero's Journey in many ways. Heralded as one of the best movies since The Secret, Finding Joe the movie has an underlying inspirational message that anyone with courage can go out and build the life that they secretly yearn for.

Natalie : Today on the show, I'm talking to the creator of the amazing movie Finding Joe. Now Pat Solomon shares his journey and the reason behind making the movie and this movie is actually called "The Next Secret". So enjoy.

Hi I?m Natalie Ledwell and this is the Inspiration Show. And today we're in LA, I'm in the home of Pat Solomon. Hi Pat.

Natalie : Now, it great to be here with you. Now the reason we're with Pat is he is the creator of the new movie called Finding Joe. And I actually found out this movie from Richard Cowen and Michelle. Now they're other guys from Beyond Board and they were the distributers of The Secret. And Michelle was very very excited about this movie and she's actually telling it as The New Secret, you know, as popular as that movie, so ?

Natalie : Absolutely. It's fantastic. So can we start a little bit with your story Pat, like what's your background?

Pat : My background as a film maker is I was right at on high school, shooting kind of extreme sports stuffs, like snowboarding and skateboarding. I kind of just, was shooting the stuff that I was in to and that kind of vented suffering actually two commercials, and so I graduated two commercials and I've been shooting commercials ever since. And then, and I've been thinking about in Joseph Campbell's work has been a really a big part of my life. You know it really influences a lot of my major decisions. So I really wanted to do a film about his work and how it influences people. And you know I kind of having, at the point which I started the movie, I was having a lot of personal crisis and as we?re talking about before my parents passed away really close together and I took that kind of a wakeup call, okay I have to make this movie now.

Natalie : Right. So how long did you take to make the movie?

Natalie : Yeah. So you were telling me before is I was, quite a journey for you.

Pat : It was quite a journey. Yeah. It was like every other journey, you know, it was full of great highs and really low lows and you know at the end of the journey I came away with some really good treasure.

Natalie : Right. So tell us about the movie, what what's the main theme that runs through the movie?

Pat : The main theme it's is kind of an exploration of what chemical cause the hero's journey but to put it in short terms I would say it's the story of your life. It's the narrative of your life, you know it's what you do as a human being and it's the same thing that you see in every movie and read on every novel. It's this arc that goes like that which is the arc of the hero on the screen and the arc of a personal hero in life.

Natalie : Right. And so what is the hero's journey?

Pat : Well it's to put it in clinical terms, it's this journey that starts out with something called separation you know you separate from your normal environment, your village you go out in the forest away from your village, people will say no don't go, and you have an adventure where you are initiated, it's called initiation and then you return to your village with the knowledge or the treasure or thing that you've gained.

Natalie : Right. Okay. So this is how you actually apply that specific structure to life.

Pat : Exactly. That's kind of, I mean I didn't do anything, that's kind a how Campbell, that's what he was really put him in the map. You know that was his big that's what he noticed in every story he was reading, he kept seeing the same themes throughout the world, the same motifs and started asking why is this you know. And he quickly quickly put it together that it's a projection of the human psyche, it's a projection of your fears, dreams, your life, I put up on screen.

Natalie : And you've actually got some great interviews with amazing people in this movie as well.

Pat : Yeah. I thought that was cool. I mean the thing that I really like is that to me the movie is a reflection to who I am because of my personal journey so I surfed and I skate, so in addition to the obvious choices which are would be the Campbell experts you know, Bob Walter who was the president of the foundation and your classic kind of guru types like Departurpra, and intellectuals like socrates, those I would say are kind of expected but I surf and I skate so I wanna bring that in part of my so that's why I interviewed Tony Harkin, Led Hamilton, who had no idea who Joseph Campbell was. They didn't know the name. But I knew they would be answering in the same manner that anyone else would because they are in the same journey as anyone else.

Natalie : Yeah. So, why did you do the movie?

Pat : I?m still trying to figure that out. I don't know, you know like I said I was going through a lot of personal crisis in my life and I've been thinking about doing the movie, I always wanted to do it just because like my personal relationship was, no not my personal relationship but I guess my personal journey was really influenced by Campbell's work and I really think that his work influences a lot of major decisions in my life, including in becoming a film maker, so I want to take what I have learned and I wanted to kind of give that back to the world like look this is what I learned and the little thing that I liked about during the movie was like Campbell's work was really intellectual, you know most people encountering college or in screen writing classes but outside that you know most of the people wouldn't hear the name but it's really accessible tooth and I thought that if I would to make a film, my main goal would be to make it accessible to people who had never heard the name Joseph Campbell.

Natalie : Excellent. Well guys make sure that you get hold with this video. Now where can people purchase this DVD?

Pat : The DVD is on a website, findingjoethemovie.com, and it's also on iTunes.

Natalie : Excellent. Well thank you so much.

Pat : Thank you so much. Thanks for coming; I'm excited that you guys came.

Natalie : Excellent. So guys make sure that you grab that video, so it's findingjoethemovie.com or you can just click on the banner to the side there, you actually go through and you can purchase the movie through that banner. So guys make sure that you share this video and the information in it and you can do that by clicking the Facebook and Twitter share buttons above. And if you haven't done so already, make sure to put your e-mail on the box above there, cause we'll send you the six pre-made mind movies and we'll keep you up to date on all our upcoming shows. So until next time, remember to live large, choose courageously, and love without limits. We?ll see you soon. 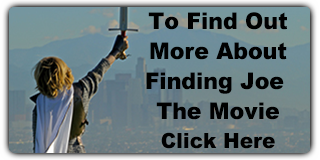