Accelerate Your Inner Transformation With The No. 1 Most Popular Peak Performance Technology Featured At Dr. Joe Dispenza's Advanced Workshops:

Mind Movies Has Touched The Lives Of Over 5.8 Million People Worldwide, And This Remarkable Technology Trains Your Brain To Pull Your Wildest Dreams Into Reality At Dr. Joe Dispenza's Advanced Workshop Events

"Those Mind Movies Were Amazing!"

Mind Movies are fun and deeply transformational 3-minute videos that combine visualization, affirmations, and positive sounds and imagery to dive into your mind.

Mind Movies retune you on a subconscious level to create any outcome you want.

Whether it's better performance at work. A more positive relationship with money. A healthier body. Greater empathy and connection with others. 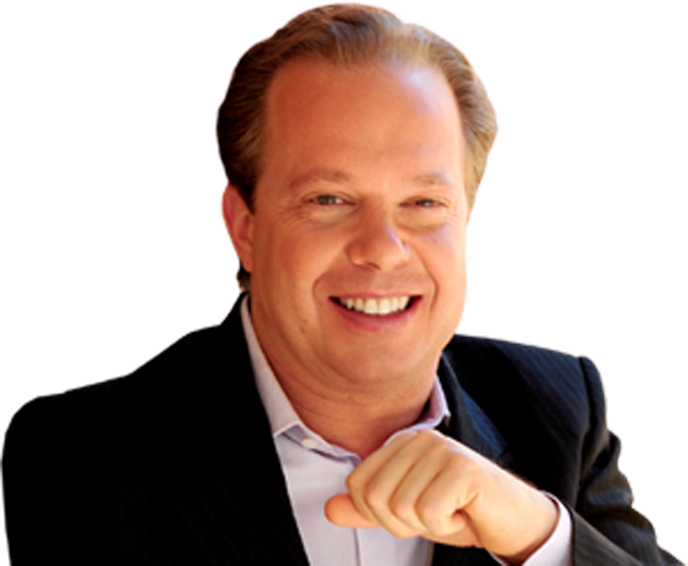 Dr. Joe uses these Mind Movies at his Advanced Workshops over the last few years to accelerate participants’ mind shifts - and he’s constantly getting requests from people who just want more Mind Movies.

And so recently, he approached the creators of Mind Movies to get you a special deal on their best-selling software... that allows you to effortlessly create your own PERSONALIZED Mind Movie in a few short minutes.

You'll see how it works in just a moment, but first:

"Have you ever been driving down the road in your car, and heard a familiar song on the radio that instantly brings a rush of visuals, emotions and memories into your mind?

This trigger is known as an associative memory; the song activates a set of circuits in your brain to remember the past.

Mind Movies works in the exact same way; except instead of remembering your past when you hear that song...

You remember the future you want to create when you watch your Mind Movie.

What's amazing is that biologically, this process looks exactly the same in your brain:

As this associative memory is triggered, your brain begins reorganizing its circuitry and laying down the tracks that turn the future you visualized in your Mind Movie, into reality." 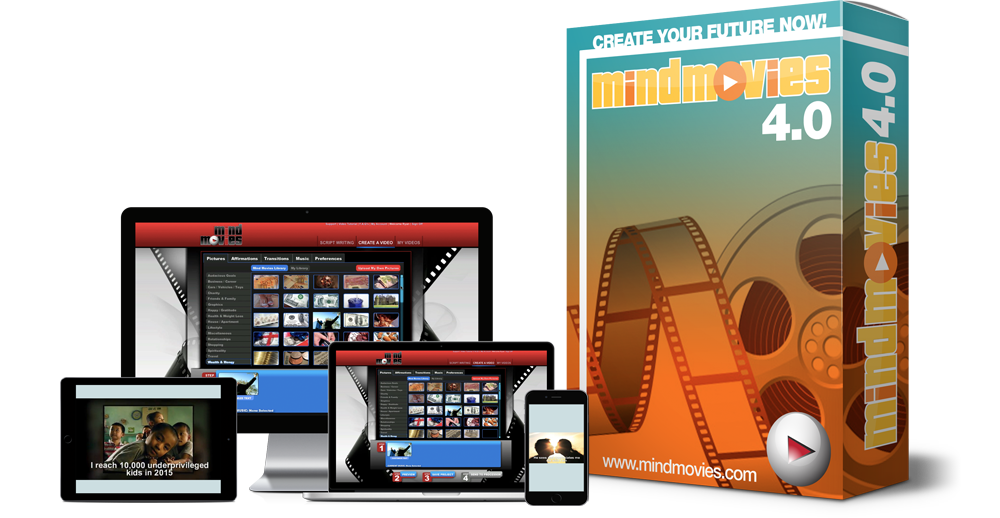 The Mind Movies 4.0 Creation Kit is the latest, most powerful version of their bestselling subconscious reprogramming technology that makes you the writer, producer, and director of the movie of your ideal life.

What you get is a powerful, easy-to-use program that allows you to create ANY 3-minute Mind Movie you want, powered by your affirmations, visuals and even music...

As easily as sticking pictures on a vision board.

In fact, it kind of is like a vision board...

A living, breathing one, that brings YOUR greatest story to life.

How to create your Mind Movie in 4 effortless steps...

OR review these 4 steps:

And that's it! In just a few short minutes, your personalized Mind Movie is ready to watch or download to your computer, smartphone or tablet.

"I personally have had an amazing experience with Mind Movies. Unexpected cash, unexpected checks, a beautiful spa vacation, even pets; specific pets that I wanted just fell in my lap. It's been great." 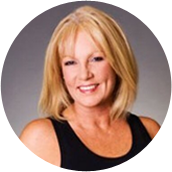 How an 'old school' meditator used Mind Movies to overcome his sense of unworthiness... and manifest a life-changing windfall.

For Tom, a long-time meditation enthusiast, Mind Movies wasn't love at first sight. He was skeptical about the idea of using 'technology' in his meditation and personal growth practice.

But with his friend's encouragement, he decided to try it.

"My first Mind Movie was filled with pictures of saints, yogis, and wise quotes from Abraham Lincoln and Winston Churchill," mused Tom. "I was focused more on enlightenment, and less on wealth and material things... not so much because I didn't want them, but because I somehow felt unworthy."

Then Tom stumbled upon an online photo of gold and silver coins. On a whim, he decided to include it in his Mind Movie, along with the Chinese character for affluence.

Tom proceeded to use his Mind Movie for a number of weeks to, as he put it, "communicate with my future self and erase my sense of unworthiness."

His turning point happened on a seemingly ordinary day, when a good friend whom he hadn't seen in years came to his house, and placed an envelope on his table.

In the envelope was her will, written just shy of her 68th birthday.

When Tom skimmed through it, he couldn't believe his eyes.

You now have the power to create your life's greatest story.

A story where success, affluence and well-being are your default state.

And where even your most stubborn challenges and obstacles have ZERO power over you.

Are you sipping ice-cold daiquiris on a warm and breezy tropical beach? 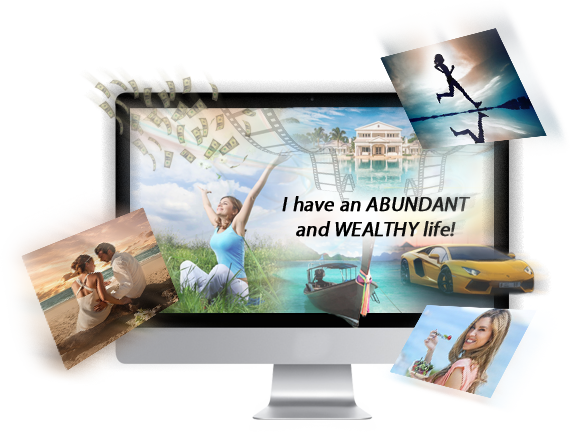 Are you carving your convertible sports car down the breathtaking slopes of Italy's Amalfi Coast, wind in your face and love of your life by your side?

Are you growing a passion-driven career or business empire that rewards you for helping others with your gifts and talents?

Or maybe you're just enjoying long and lazy afternoons with your loved ones, finally free of the financial, time and health worries that held you back in the past.

Whatever your story is...

Mind Movies Can Make This Your Reality - And As A Friend Of Dr. Joe, It's Yours For Nearly 75% Off

And for a technology you'll use for the rest of your life to shape your greatest future - that's already a great deal.

But Dr. Joe and the Mind Movies team have been working closely together for years.

They've seen just how much his students love Mind Movies, and how profoundly it accelerates their results with his teachings. 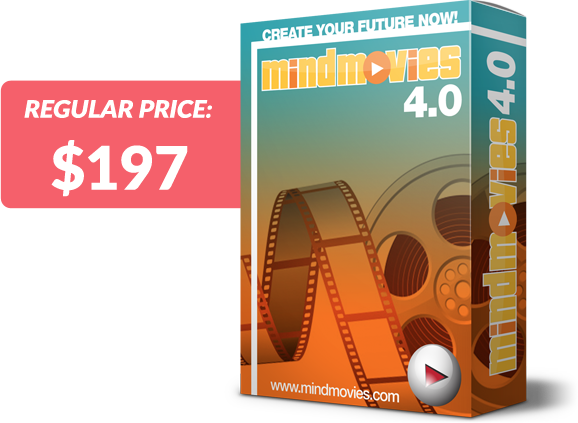 And as an incentive and reward to his community, they've agreed to take nearly 75% off the price (but for a very limited time only).

But just a small one-time payment of $49.95. And that's the best deal you'll ever find on what is quite possibly the most popular personal growth technology on the planet. 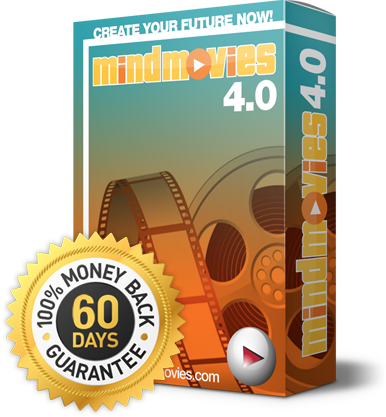 Mind Movies sincere PROMISE to you is this:

Once you order, login and create your first Mind Movie. You'll instantly see how easy and fun this technology is.

Then, once you start watching your Mind Movie daily, and even creating new ones as you please, you'll realize how transformational it is.

In fact, some Mind Movies students report improvements in their emotions, thoughts, and habits, just after a few short sessions.

Finally, once you start seeing every area of your life begin to change for the better...you’ll want to share this technology with everyone you know.

We know that is a bold promise – but that’s what we have seen time and time again in the students who join the Mind Movies movement.

So if after using this technology you feel that your life has not transformed for the better...

In fact, even if you just change your mind or can’t find a few minutes a day to make and use your Mind Movies...

Just email [email protected] within 60 days for a full and friendly refund.

There's always going to be a movie playing in your mind...
what will yours be?

The truth is, disempowering movies are a fact of life.

They can invade your mind from anywhere - like from things you saw your parents saying or doing growing up.

Or the pain of a bad breakup.

Or a traumatic childhood incident.

Or the anxiety from a problem you can’t seem to solve at work or at home.

Or fear about something that hasn’t even happened yet, like surgery or a tough conversation you need to have with someone.

What’s frustrating is, even when you’re aware of these ‘bad’ movies, it’s nearly impossible to press the STOP button on them.

But here's the thing:

While you can't stop these 'bad' movies from forming...

You can replace them with empowering movies - and that’s exactly what Mind Movies does for you.

So just like how you take a shower whenever you’re feeling icky...

The Mind Movies 4.0 Creation Kit is a tool you use over and over again to ‘cleanse’ your subconscious... whenever negativity or self-destructiveness starts building up inside it.

Now it's your turn - just place your order below, and in minutes you'll be making the movie of YOUR greatest life… and turn it into your reality.

How to get started: 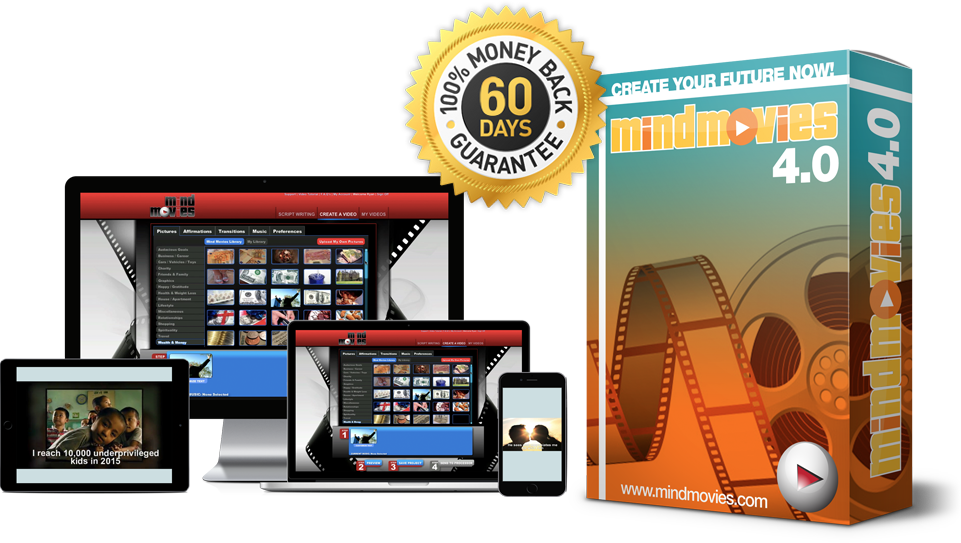 How exactly will I benefit from the Mind Movies 4.0 Creation Kit?

The Mind Movies 4.0 Creation Kit allows you to create fun and simple, yet powerful 3-minute multi-sensory 'music videos' that reprogram your subconscious through the scientifically proven power of visualizations and affirmations. The result is peak performance in every area of life. From melting away self-doubt, to erasing stress, to boosting creativity, your Mind Movies will get your mind and the Universe itself on your side, as you manifest breakthrough after breakthrough in your career, finances, health and relationships.

I've got a busy schedule, will I really have the time for this?

If you can spare a few minutes a day to watch just one YouTube video, you'll have time for your Mind Movies. Making your own just takes a few short minutes, and you only need to watch it for three minutes a day, either at the start of your day, before bed, or even as a mid-day pick-me-up. And as the subconscious reprogramming technology starts amplifying your productivity and energy, don't be surprised when you find yourself having more free time throughout the day.

Will this work for me if other personal growth tools haven't worked for me in the past?

The challenge with many conventional personal growth tools is not that they're not powerful - it's that they require too much time and commitment. Mind Movies is a quick, fun and easy technology that anyone can use for deep transformation from the inside out, in just a few minutes a day. Their 5.8 million students range from personal growth beginners to lifelong consciousness explorers - and the vast majority agree that Mind Movies is one of, if not the most effective personal growth tool they've ever used.

Can I get help if I need guidance with creating or using my Mind Movies?

Absolutely! We have a trained Customer Coaching team that would love to hear from you, and help you get the most out of your Mind Movies 4.0 Creation Kit. Just email us at [email protected], and we'll aim to get back to you within 24 hours.

How long do I have access to the software?

You get lifetime access to the software, all the bonuses, and the Mind Movies community.

Can I make and use more than one Mind Movie?

Yes, you can make as many as you like. In fact we recommend creating one 3-minute Mind Movie for every aspect of life you want to focus on, like your wealth, health, love life, family, fitness, etc.

Can I use my own photos, music and videos?

Yes, in fact we encourage you to. You can even add non-copyrighted YouTube videos to your personalized Mind Movies.

Can I download my Mind Movies to my computer, tablet or smartphone?

Yes, you can download your Mind Movies to virtually any multimedia device, and use them on the go.

What if I get it and change my mind?

You have a 60-day guarantee for total peace of mind. We want you to try the Mind Movies 4.0 Creation Kit, and make sure you like it before committing your investment. If it doesn't work for you for whatever reason, even if you're too busy or you just change your mind, you will be refunded in full when you notify us within 60 days of your purchase.